As time goes on I think more and more about a book on human development that was never even categorized as a book on psychology or pedagogy in any bookstore or library. It is, really, the most astonishing and courageous book on human psychology, and has the gift of being written so well that it’s less than 200 pages. I’m talking about Paul Shepard’s Nature and Madness. And I thought I would reflect a bit on this book here to share with you why it is so important.

Most theories of human development, beginning with the major theories of Freud and Erikson, as well as all of cognitive psychology end with a fatal cul-de-sac of understanding. They end in the human mind. Or, more specifically, they end with what can be broadly characterized as a field of human representation. Even today, there persists a kind of popular understanding of inner versus outer, of subjective versus objective realities. 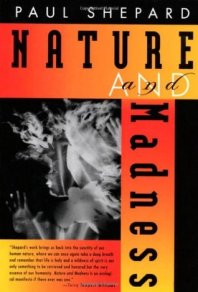 In my dissertation, I argued that what we mean to be civilized is to really domesticate our entire being to a rather narrow set of cultured traits.  People are kind of like bonsai trees, their cognitive and perceptual being heavily pruned, which I argue is a process Freud mythologized in his interpretation of Oedipus.  To be oedipalized is to have one’s being pruned, made neurotic, corralled into a suitable anthropocentric domesticated shape.  Our understanding of development then remains rather narrow, and kind of closed off to the world with a kind of dreadful ecological narcissism.

This is not just psychological theory, but part in parcel of a civilized ontogeny (that is to say, the way in which civilized beings come into being).  Shepard does a kind of psychological history to unwind how this ontogeny got from a kind of holistic being-in-the-world to a rather distanciated mechanistic phrase like “I think therefore I am.”  Shepard examines how early humans began to change the cultural meaning of human development up in a few chapters called The Domesticators, The Desert Fathers, The Puritans, and The Mechanists. In each the trend is toward increasing alienation from the Real as human industriousness took an increasing role over nature, from stewardship to manipulation to representation to simulation.

Most of psychology has faulted on a kind of solipsistic, relativistic cul-de-sac of personal beliefs.  It tended to analysands laying back on sofas in tiny rooms rather than opening the doors to whole ecosystems with their intertwined human and non-human communities.  It left out, really, the real world.  And our picture of development can be left incomplete, self-indulgent, narcissistic, if it does not eventually open the door to the unfolding world and take up its affiliation there.

The danger of our over-domesticated selves, Shepard warns, is a world of emotionally crippled half-grown adults whose instincts can turn mutated, even sadistic.  What if this went another way?  We see in young children a great curiosity about the natural world, of living things, collecting bugs, plants, knowing great taxonomies of creatures, even whole taxonomies of dinosaurs.  It takes up a significant portion of their living imagination.  Many “grow out” of this, and by the time they turn teenager, retreat to a world of simulacrum, social media, commodities; all which will have signified an enculturation into (post)modernism.  That is one path we see adolescence taking.  But there is another.

Shepard has great hopes for adolescence as a phase where the nascent animism of childhood grows in sophistication.  This was a time when a youth can be initiated into a deeper cultural understanding, and can be trusted with a cultural responsibility which will be the hallmark of adulthood.  For a economically indigenous culture, the natural world is a profound reality with which to seek meaning, incorporation, compromise and affiliation.  To become a sane adult is to understand the complexity of these affiliations and how to live with them, that nature in itself is a profound reality with its own living meaning. Without this foundation of being, we are all condemned to a kind of baseline anxiety about being-in-the-world that may be best described as an attachment disorder.

What Shepard calls for at the end of his erudite criticism is for a new way of thinking about ourselves in the world. Shepard gives this summary of his theory:

Our fear of helplessness, the perception of the cosmos and even ourselves as nonliving, and the threat of a meaningless and disordered world are all familiar complaints of the alienated modern man and, as I have suggested, are all associated with characteristic phases of psychological development. Insofar as they comprise or express our sense of a menacing disintegration, they serve a neurotic quest for control. From the self-abnegation and bodily humiliation of Christian flagellants, to the pious compulsions of fanatic cleanliness and sanitation, and finally the yearning for power over physical nature made possible by industrialized technology, we are engaged in a desperate flight from inchoate diversity and our own feelings of anonymity and fragmentation. Today we seek to fabricate a world in which we hope to heal our stunted identities and rear children in a hopeful and meaningful setting. But our rural/urban landscapes, generated by an ideology of mastery, define by subordination, not analogy. The archetypal role of nature – the mineral, plant, and animal world found most complete in wilderness – is in the development of the individual human personality, for it embodies the poetic expression of ways of being and relating to others. Urban civilization creates the illusion of a shortcut to individual maturity by attempting to omit the eight to ten years of immersion in nonhuman nature. Maturity so achieved is spurious because the individual, though he may become precociously articulate and sensitive to subtle human interplay, is without a grounding in the given structure that is nature. His grief and sense of loss seem to him to be a personality problem, so that caught in a double bind, he will be encouraged to talk out his sense of inadequacy as though it were an interpersonal or ideological matter. Indeed, the real brittleness of modern social relationships has its roots in that vacuum where a beautiful and awesome otherness should have been encountered. The multifold otherness-with-similarities of non-human nature is a training ground for that delicate equilibrium between the play of likeness and difference in all social intercourse and for affirmation instead of fear of the ambiguities and liveliness of the self.

This, I think, is a tremendous and vigorous statement, and an endorsement that being itself is not a being-from, but a being-with. It provides us an interesting picture of what a mature humanity could be if it had its defining features well rooted. Some scholars have taken up this challenge in ecophenomenology and deep ecology. I acknowledge Richard Louv’s Last Child in the Woods: Saving Our Children from Nature Deficit Disorder as another good start. I highly recommend Paul Shepard’s pathfinding work, however, particularly Nature and Madness. I think it is a vital document in pointing toward the potential of the human out of the word cage of our intellectual tradition.