Kendell Jenner is said to have been “traumatized” by the backlash she’s gotten on social media for her much maligned Pepsi Commercial, made by a professional Super Bowl ad man.  It was widely seen to be insensitive to the struggles of actual protesters of the Black Lives Matter movement with its race exploitation.  That’s what happens when you take social outrage and turn it into fizzy pop, yet somehow the ad men think that fizzy pop has to be associated with something important, and at the same time, attempts to diminish the import of BLM by turning it into something as trivial and diabetic as corn syrup fizzy pop.  Miriam Bale in The Hollywood Reporter in particular called out the “vampiric” relationship the Kardashian/Jenner family has with black culture.  Here are a couple of backlash tweets:

The worst part of the Pepsi commercial is when Kendall decides to protest racism by making a black woman hold her wig.

I could spend the rest of my life trying and not even come close to making something as funny as this Pepsi ad.

Food, (if you can call what they make food), giant Pepsico seems to have its tail tucked between its legs.  Saturday Night Live chose to join the party, pounding Pepsi last weekend, in which they imagined the director behind the scenes about the shoot the ad.  The director gets phone calls from his family, and each person tells him how tone deaf the ad is.  SNL here appears to attempt to join in on a savvy cultural critique, however late to the culture jamming party.  It is a bit ironic, because, as I claim, SNL as corporate comedy, has itself been pretending an edgy relevance with its own tone deafness for years, and like Pepsi, indulged in appropriating the culture of resistance with its own banalizing performance.

Jay Pharoah recently spoke out about his firing from SNL last summer after six years on the show.  He spoke out about how SNL thinks of its talent in these little boxes.  It’s clear in Pharoah’s case – obviously a talented impersonator, was obviously underutilized, relegated to doing the same few impressions – especially Obama and Denz

el – over and over.  Pharoah hated being put in this box, and knew it was harming his career.  (Perhaps he saw what Keenan Thompson has become over the last fourteen years (!) on the show, regurgitating the same characters over and over with the same “see, I’m doing a character” voice.)

Back when I was doing improv in Houston around 2006, our director and coach, MacArthur Antiqua, told me of his time at Chicago’s famed Second City learning the craft of longform improv at the same time as Horatio Sanz, who went on to star on SNL from 1998-2006.  Mac told me that he could have tried out for SNL, and said that he couldn’t do it knowing that because he was Filipino, he would be repeatedly typecast as ethnically generic others – Asians, Hispanics, whatever – kind of like the career of Lou Diamond Phillips.  It’s the down side of being a non-white actor in showbiz.

It turned out Horatio Sanz was also eventually fired too.  Sanz went further than Pharoah in grousing about SNL, telling Bill Simmons that he believed SNL was “conserva

tive bullshit,” and had a role in helping to normalize George W. Bush with the famous Will Ferrell impression, which made Bush seem like this affable ordinary guy rather than the dangerous delusional war mongering neocon ignoramus that he was.  Sanz said:

When that election came up and it was really close — we’re talking about 10,000 votes maybe difference in Florida,” said Sanz. “If people are on the fence, and they watch SNL and see Will Ferrell’s being W. and having a beer and being a bro, I think that maybe pushes it over. We’re talking about 10 million people that are watching that, and to say 10 thousand of those would be swayed by the television show isn’t too crazy. 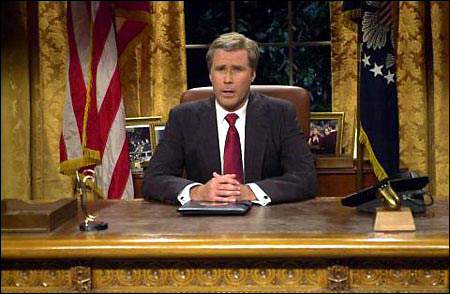 In an earlier entry called “Why Liberal Comedy Failed,” I argued that the corporate media knows nothing but its own banalizing function.  Even when the corporate establishment attempts to create a “keep hope alive” message it comes out in precisely this way – an awkward tone-deaf quality.  We kind of know it when we see it.  What is rather impressive is that it is now actually pretty common for people to talk about concepts like “whitewashing,” “white privilege,” and “cultural appropriation.”  These were terms very much in the margins 10-15 years ago.  So when a movie studio blames the so-called “controversy over white washing” for the box office failure of Scarlett Johanssen’s Ghost in the Shell, or Matt Damon’s The Great Wall, I think it does signal to the movie bosses that the audience is more sophisticated than they realized.  The wise cynicism around Pepsi’s attempt to heal the world with their sugar water – as if the aluminum tube were the Rod of Aesclipus – also signals another backlash against being fed this simplified world of branding.  It’s a long cultural space from when in 1971, Coca -Cola cast itself as messianic world-healer that “taught the world to sing in perfect harmony.”   Reinforced in our time is that hopeful move to re-appropriate the brand and slingshot it back into the cultural space given its proper democratic creativity.  My remaining question is – who’s to satirize the corporate satirizer?