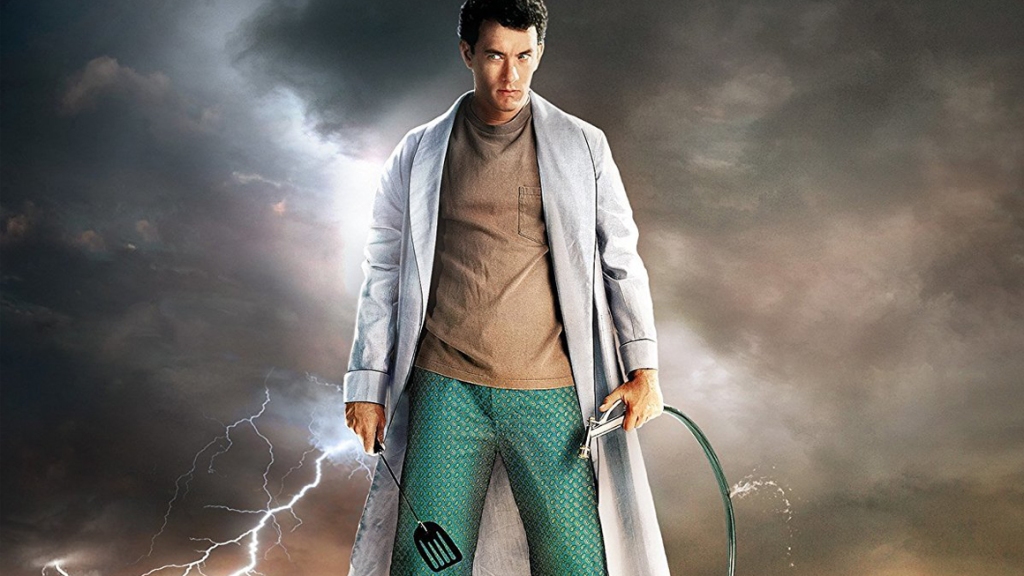 Last year’s smash hit Get Out showed new possibilities of the horror genre by riffing on genre tropes by flipping the oscar-winning script on race.  It vaulted writer-director Jordon Peele to status as a major Hollywood player and we’re all anticipating what he’s cooking up next.  As he’s teased, he has other ideas for “social horror.”  While it isn’t exactly a new idea, it is one perhaps that’s been needing a good dust off.  Get Out itself was primarily inspired by The Stepford Wives, which is the Get Out of 1970s women’s lib, and it has in common the old Twilight Zone which dabbled in social horror and paranoia.  Looking back into the film vault, I found a surprising riff on racial and social horror themes in 1989’s The ‘Burbs. This Tom Hanks horror-satire is basically a compendium of middle class white fragility, which is the engine of the suspense as well as the humor.

Set on a single American suburban cul-de-sac in anytown USA, Ray (Hanks) is home for a week of staycation.  Only he can’t seem to get a day’s rest because he becomes suspicious of his neighbors, the Klopeks – whom he’s never yet seen.  Ray and his other neighbors, the always hungry Art and a Vietnam veteran Rumsfield (Bruce Dern) begin to be suspicious after hearing odd noises in the neighbor’s basement and believe their strange neighbors to be Satanic murderers.  Ray watches through the rain the Klopeks in black cloaks digging in their backyard with pickaxes, and later rifled through their trash with his stakeout colleagues.  Things escalate from there as they suspect an elderly neighbor, Walter, of being taken and killed by the clan Klopek.

All of the suspicious innuendo make this film a sort of grown up version of an old Scooby Doo mixed with Hitchcock’s Rear Window and a touch of Twilight Zone’s “The Monsters are Due on Maple Street.” The film delights in making fun of its hysterical protagonists with screwball hijinks.  At begins with prosaic concerns about lawn care and poodle pooping on Rumsfield’s perfectly cut lawn.  This basic problem is synecdoche for the rest of the plot.  Poop, the invading Thing, is an all too natural intruder in the ideal space of the lawn, symbol of middle class white culture’s American dream.  The thing about the American dream is that it takes constant care, cultivation and protection.  Each board-fenced quarter acre a private kingdom for its master, and a marker of pride, a slice of nobility.  The poodle poops just as Rumsfield (adequately named) raises his flag, his lawn itself a microcosm of America.

Interesting here is the absolute whiteness of the cast.  This suburb is a veritable whitetopia, a white social space, a new Mayberry far from the urban melting pot.  If the Burbs were made today, it would no doubt have a more diverse cast, but it would obscure the racial element of suburban life – it’s historically true of the white flight of the mid-twentieth century.  It’s conspicuously white and plays the conflict on coded racial hysteria particularly because of the cast’s absence of racial otherness, it cannot be but about its own whiteness and does so by finding other ways to express the anxiety-producing contours of racial power and privilege.

An example of this is when they first approach the Kopek’s falling-apart house, they run into a horde of bees living in the walls.  Bees have a number of symbolic markers having nothing to do with honey production, but a fantastic fear of collectivity, of the hive mind ruled by a hive queen, which challenges the suburban ideology of white male American individualism.  In the eighties, this basic fear took an added dimension in the media as a fear of foreign “killer bees.”  Specifically, “Africanized bees” migrating through Mexico from South America.  These bees were said to be African hybrids, more “aggressive” than good old regular bees.  The hysteria had racist and xenophobic markers, and played on fears of communist collectivism as well, an extension of race paranoia and the red scare.  Horror movies of the fifties riffed on this all the time – the blob, radioactive insects, and alien invasions – subjects of Joe Dante’s follow-up to the ‘Burbs, 1993’s Matinee starring John Goodman.

Another part of otherness here is the unhygienic, unkempt, uncivilized next door neighbor.  The Klopeks have defied deed contracts and codes of appearance and housekeeping deemed the gold standard by good white people.  It’s a device they’ve used to keep away undesirables who would stain their racial innocence.  This hope is dashed when Ray gets a glimpse of Hans who comes outside looking like the reclusive Boo Radley from To Kill a Mockingbird.  To middle class whites, these kinds of characters, poor white trash, are a symbolic failure of Manifest Destiny – inconsistent with the dream of white innocence.  Good white people like to think of themselves as educated, progressive go-getters who have transcended the sins of the racial past.  They like to think they are color blind and fair liberal-minded people, but in so doing have to split their own psyche in order to efface their own complicity with the structures of white privilege.  Externalizing white panic onto white trash is a key strategy in order to not deal with race, or social introspection or the negative affects of historical guilt and shame.   White trash then, as failures, as the ignorant, as washouts from the great American rat race are the “bad ignorant racists.” The funny thing is that because white trash exist, good middle class whites get to feel better about their perceived progress.  Whiteness is the source of this movie’s fear and suspense.  The Burb’s horror and satire is about middle class white people’s fear of losing racial status.

.
Ray and Rumsfield get some sense talked into them by Carol (Carrie Fisher) and they bring a brownie peace offering to the officially meet the Kopeks.  It turns out to be the funniest scene in the film as, Hans with the sound of flies circling him – offers a can of sardines to the guests.  Also introduced are Uncle Reuben and Dr. Werner, who are suspiciously othered.  Rumsfield probes them to determine where they are from – “Are you Slavic?”  It’s a way to undermine their whiteness.  They aren’t just poor white trash, but vaguely Eastern European.  They come from wherever Bond villains come from. Somewhere communist.  Somewhere with an Orthodox church.  You know … Castlevania.  Somewhere where sardines from a can and pretzels is normal food. 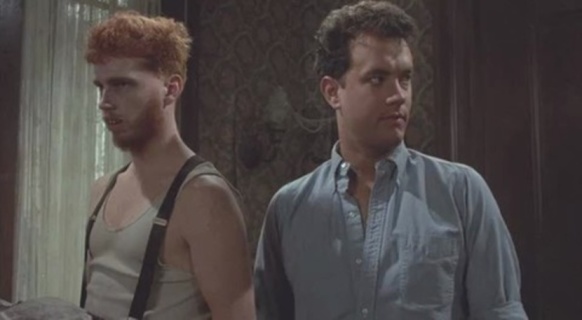 Ray can’t seem to shake his paranoia on his television either, and what he sees extends the white terror.  The movies on t.v. – Race with the Devil, The Exorcist, and Texas Chainsaw Massacre 2 – deal with a mixture of the hysterical fears of the occult in the 1970s-1980s, and of the terror of poor white trash.  It lines up with the Satanic panics of the 1970s and 80s, the Christian crusades against Alice Cooper, Ozzy Osborne and Dungeons and Dragons.  And the persecution of the West Memphis Three, the Bronx Five, Oak Hill, the jailing of hundreds of parents in Bakersfield and other towns over fears of child abduction-become-satanic sacrifice.  These Crucible-like witch hunt phenomena are a recurring theme since the American self’s puritan origin.

By the time Ray, Art and Mark really make a mess of things and blow up the house, they’ve come full circle and have to face their own paranoid stupidity.  Ray says “we’re the ones who are insane!” and leaps into the ambulance ready to be taken to the asylum.  The police detective who arrives on the scene – the only black character in the film, there to sort out the matter and bring justice to the Burbs.  It’s a flash of reason, and immediately the story starts to figure everything out for some reason, where everyone steps back to think.
.

It could end here, but doesn’t because there is no way to have a satisfying ending to have grown men flap around hysterically in a white panic over nothing for an hour and half.  So the empty McGuffin has to have a payoff.  The ending is rushed so the threat finds its manifestation and vindicates Ray and his neighbors suspicion.  It also vindicates suburban vigilantism appearing in later films like 2012’s crude and ill-timed post-Trayvon-slaying movie The Watch, which has four dudes protect their neighborhood from aliens.  The ‘Burbs lingers again in Shia Lebouf’s great Rear Window remake Disturbia, young adults morphing into neighborhood vigilantes.

It makes the rest of the film no less ridiculous however, as we never know the Klopeks or their motivations, nor experience them as true antagonists.  Although the ending is an obvious cheat, the film deprives us of an answer to urbanoia and gives fuel to the fears of white America gating in their neighborhoods, arming themselves, and setting up surveillance equipment to protect themselves from those who would tarnish the veneer of the American dream.  Twilight Zone’s “Maple Street” episode ended more powerfully – the aliens are on the hill simply flicking the lights on and off – as they watch these hysterical people destroy each other.