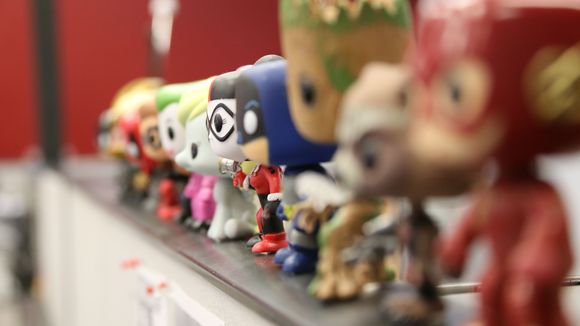 Ever notice that stores that sell any sort of entertainment product are filling up with these little nostalgic keepsakes courtesy of Funko’s Pop! collection and other brands. Perhaps that’s not new in itself, except by the volume and variety of them. But in particular, there is a great focus on collectible little disproportionate figures from popular franchises. Little bush babies of all manner representing Game of Thrones, Alien, Avengers, X-Men, Star Wars, Harry Potter, Stranger Things, even horror icons like Chucky, Friday the 13th, Nightmare on Elm Street. Little babied figures with large heads, big eyes, made of plastic. Stand alone or on a mini set, or attached to a keychain. It seems to be an evolution of what were once Cabbage Patch Kids, Beanie Babies, bobble heads, and Pokemon. Now all franchises are getting Pokemon’d, telling us we gotta catch ’em all.

It used to be adults buying these for kids. Or was it that the kids were an excuse for the adults to exorcise their Pokemonification? It’s a subterfuge kidults no longer need. Now they can line their shelves, home theater, car or truck dashboard with these items. They’re not toys really. No one plays with them. They’re more like fetishes. Little pagan dolls that have power because these icons represent something a character, trope, story, or mythic narrative that strikes the right chord. These are the deities of pop culture. And in this realm, everything crosses over with everything else. It’s where Tyrion Lannister, Spock, Groot and Chewbacca live together on the shelf in your office cubicle. There to remind you of … whatever … when times get hard and your TPS reports are behind schedule and the boss is riding your ass. Speaking of which, there’s even a series of Office Space characters.

Millenials have taken flack for coining a term like “adulting.” For boomers and the even older silent generation this sounds infantile and the little pop culture babies they collect are signs of a generation of Peter Pans. Puers and puellas running amok, unprepared for the so-called “real world” where adults slog by a dreary world without turning into a crybaby. But I would argue that there is something far more at work than folks who have insufficient bootstrapping instinct and has more to do with the machinations of late capitalism itself. Along with it, the increasing monotony of workspaces and bland, soulless, bullshit jobs, of low wages and overproduction. Not to mention coerced desire by the culture industry and endless commercialization, the increasing disembodied technologies of electronics and distractiblilty. Nevermind the perils of crowding, overpopulation, mass extinction and the very, very real threat, nay doom of the ecosystem within the century.

It’s this sense of kidult fascination that Ready Player One got right. The novel turned Spielberg film about a dystopian Late Capitalist hellscape of the near future in which everyone tuned out of the world, retreating to The Oasis of virtual reality games. There, knowledge of pop culture has serious benefits to one’s survival in the big game. It’s Willy Wonka meets the Matrix. Conspicuously missing from the film is much exploration of what a shit world we’re creating out there twenty minutes from now. The movie, like ourselves, prefers moments of escape.

The moments of regression to a simpler time, to youth, even if symbolized by a baby-sized Freddy Kreuger, take us on a journey away from the living nightmare of the present from which there’s no waking.