Do you notice anything in your immediate surroundings that would not have been the same twenty years ago?  Perhaps even thirty, forty years ago?  Lamps, blinds, windows, doors and floors.  Patio furniture, tables, cookware, brooms.  Aside from a few little techno gadgets – television, cyberspace, and maybe a plug-in car – nothing around us looks like how we years ago imagined the cusp of 2020.

In our library of films from the near past about the near future, about the now, we projected a technological wonderland … or nightmare.  In Back the the Future II, holograms and hoverboards.  In the Jetsons, flying cars parked at stratospheric homes.    In Demolition Man’s crapsaccrine world of pleasantry, orgasmotron helmets and three seashell toilets.  What happened to the techonological wonderland we envisioned back in the twentieth century?  What happened to our flying cars?  Why doesn’t 2020 look like 2020?  Has the future been cancelled, and if so, how?

Consider that capital has in fact stopped developing tangible things in America.  Growth is slowed over all in previously developed nations and has fled to developing nations.  Early 21st century capitalism has boomed in China instead.  They’ve constructed new cities before anyone even lives in them in anticipation of urban growth.  While the US putters along with 2% growth over the last two decades, China has crested around 10%.  In one three year period they poured as much concrete as the US did in the last century.  For those who get a hard on for economic growth, it’s enviable.   America’s economy has stopped developing.  It’s now a finance economy.  And that’s something harder to see in most places. 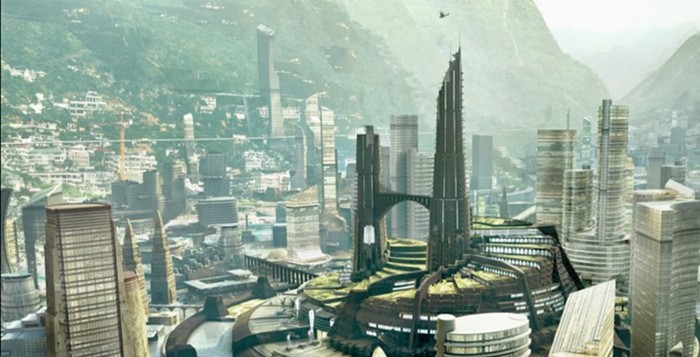 There are pockets that are hidden from view from most of us.  They are legendary, but cloaked, sort of like Black Panther’s Wakanda.  It’s evident if you look to where the small pockets of America that are Jestons’ed.   We see glimpses of it beamed through on the television, our portal to the techno bubble where brightly colored sets and made up news anchors read their agitprop infotainment product.  This is a window to the information economy.  Visit Googleplex or any of the headquarters of Silicon Valley, or Wall Street or Big Pharma, and you will find new flashy buildings that resemble what most of us in the heartland consider the future.

But our own town?  That’s decades behind.  Old buildings in disrepair, collapsing infrastructure like bridges, the lack of rail and mass transit, collapsing property values in collapsing economies.  Local businesses shuttered for good, falling prey to the China-Walmart vacuum of money extraction.  Then the hoovering up of all other retail by Amazon.  This is our world.  The one percenter towns are Jetsons.  The other 99 – more like Cormac McCarthy’s The Road.

Mark Fisher in Ghosts of My Life examined how our culture was suffering a hidden malaise.  He called it “the slow cancellation of the future,” and speculated that we struggle to reconcile our world today with the bright glorious future of our technotopian dreams we were promised.  Basically this – we can no longer even envision a future.  In fact, “futurism” is no longer a speculation of the current culture, but more properly refers to a stylized genre of fiction from the past.  By futurism we mean Phillip K. Dick, Robert Heinlen, William Gibson, Arthur C. Clark, Ursula K. LeGuin, and the like.

Basically, the present is a letdown.  It’s the melancholy of the 21st century where nothing is new.  Retro used to be a style, but it isn’t anymore because it’s so ubiquitous.  Most of our movies are remakes of stuff from the twentieth century, our music mimics the twentieth century sound.  Even techno, the once “music of the future” is now retro.  Social space, in this sense, has flattened along with the economy.  There is nothing new, but we can simulate and regurgitate the twentieth century in high def.

David Graeber picks up this problem too in his book Utopia of Rules, noting that it’s such a problem that it’s striking how little this failure is discussed.  Ironically, if liberal capitalism is, as Fukayamaists once said, the End of History, perhaps this is what they meant.  It really was the end of any notion of progress.  History is a cul-de-sac, ending in this stagnated world where there is nothing besides more monopoly capitalism, more political corruption, phony news, phony democracy, and more and more of life devoted to simulation.  The grand narratives of progress and liberation, the dialectic of history ground down to this singular world we’re living in now.  Any genuine hope for a bright glorious future now mediated by ironic distance or pastiche.

It’s hard to imagine there was a time when people genuinely thought of the future as glorious.  They looked forward to the “affluent society,” only it meant more leisure and less work once the androids arrived.  These were the dreams of the previous wave of modern capitalism, Fordism, and the Keynesian state of mid-twentieth century America.  The so-called golden age of Western Capitalism.  What we didn’t envision was that we’d ditch all central planning.  No bullet trains would ever come.  No green energy.  And in a world built by and for the plutocracy, once the Tesla Model S arrived only the 1% could afford it.

No wonder Black Panther resonated so much.  The change in the film was basically loosening it’s plutocratic grip and opening up its largess and technology to the world, redistributing wealth in fiction in ways unfathomable in the current polidical climate of resentment.  And at least in Wakanda they have flying cars.