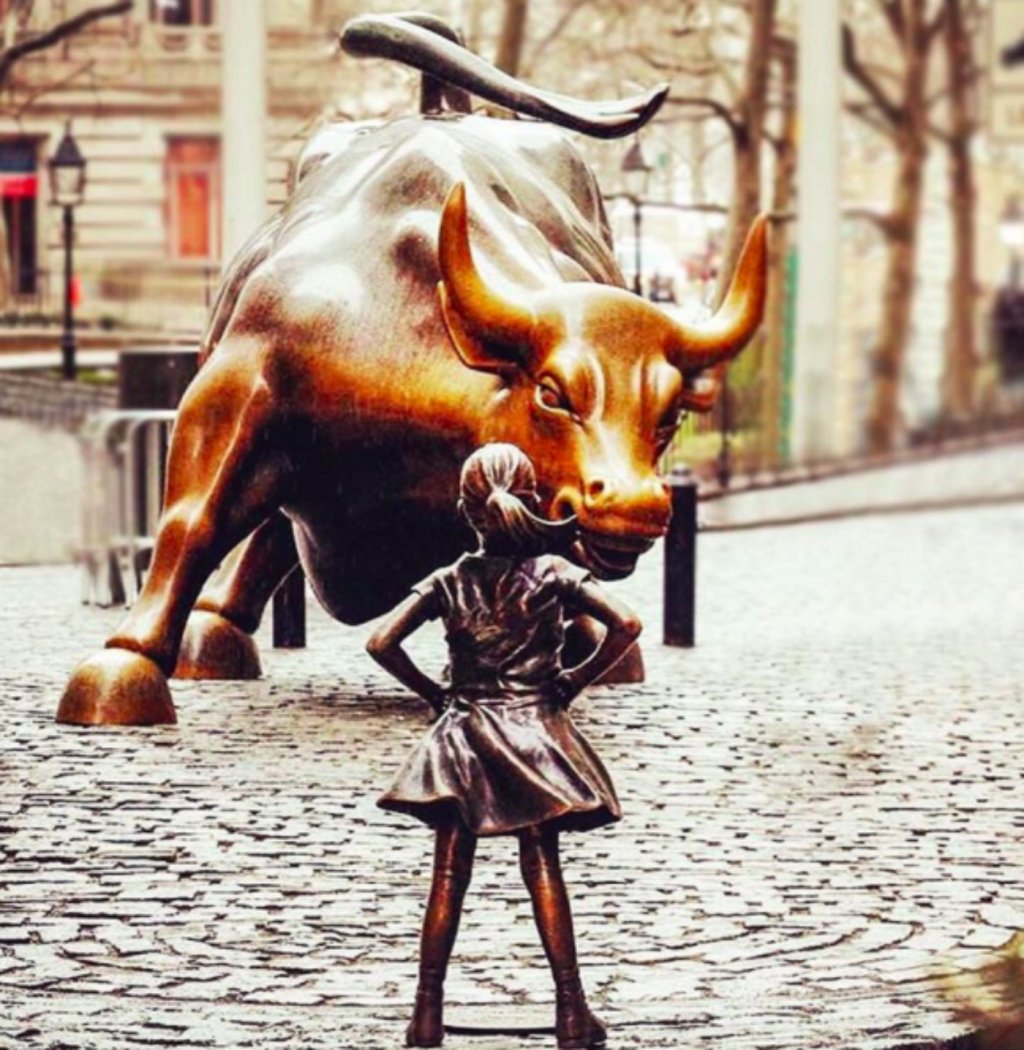 A few weeks ago the Fearless Girl appeared in Lower Manhattan. The four foot tall bronze statue of a plucky, boldly postured girl starring down the famous Wall Street Charging Bull initially caused a positive buzz on social media and has attracted so many tourists that locals are thinking of placing her and the bull in a more accessible place to manage the crowds.
The Fearless Girl was placed there on the eve of International Women’s Day by State Street Global Advisors, a Boston firm that manages a mind-boggling 2.4 trillion dollars in assets. The firm and commissioned sculptor Kristin Visbal are proud of the over all positive reaction the statue has gotten.

SSGA, however, is not content to let the art speak for itself, giving plenty of explanation on their website, calling on girl power as the “future” of finance. They quote various statistics and promoting the demand for women to occupy board rooms of the financial powerhouses of Wall Street, of which there are currently few.  It’s a kind of call corporate executives like to make these days, casting women power as a still new frontier of capital.
What’s perhaps most interesting about this work of corporate art is the relative little dissent it’s faced. The most pointed criticism so far has been from the artist of the original bull statue by Sicilian immigrant Arturo Di Modica, who crafted the bull between 1987-1989.  Di Modica independently financed his own project, the idea being to help instill confidence in a bull market after the downturn of the late 1980s. All 7,000 pounds of Di Modica’s bull was placed in front of the New York Stock Exchange in the middle of the night.  The bull was a sensation, and the city created a permanent home for the bull in Lower Manhattan.  Di Modica called his statue a symbol of the power and optimism of America.

But now, with the Fearless Girl added to the scene, the bull has taken on a new meaning as a kind of aggressive hypermasculine villainous force that must be resisted.  Di Modica is correct, the juxtaposition does change the meaning of his statue. In fact, place the Fearless Girl anywhere else and the entire scene would mean something different. Turn her around like she’s with the Bull, not against him … which would align more closely with the intent of the firm. In any case, Di Modica doesn’t see a place for the new addition. Mayor de Blasio tweeted harshly back towards him, “Men who don’t like women taking up space are exactly why we need the fearless girl.”

The other critique, although still a small one, is that this type of faux corporate feminism is that the choice of a girl image stereotypes a narrow idea of “girl power,” while conveying a sanitized, inoffensive, immature, undeveloped version of the feminine.  It preserves an idea of the feminine as potential only in its, as Christine Emba calls it,   “diminutive, co-opted feminity.”

Amanda Marcotte’s article in Salon goes a bit further, stating that while the firm can sponsor a symbolic statement like this, there is first of all no corporate interrogation into its corporate sexism (the kind which we see publicly in the harassment stories and corporate sexism at Fox News, for instance) .  This rather facile call for women in the corporate establishment is basically white and privileged one percenter tokenism which puts the onous and responsibility to climb the American Psycho Ladder squarely on women to struggle through the sclerotic patriarchal bulwark.  Marcotte writes:

If strength and fearlessness were all it took to defeat sexism, then we would have licked that problem long ago. No, the reason for women’s lack of equality is that there’s an ingrained and well-organized system to clip the wings of women and keep them in their place. The only way to fight back is through organizing and collective resistance. The image of solitary defiance in Fearless Girl is fun to look at but completely misrepresents what is required to defeat the millennia’s worth of male oppression that’s keeping women down.

This argument reminds me of the one Nicole Aschcoff, editor at Jacobin Magazine, makes in her quick read The New Prophets of Capital, where she critiques the business world’s version of feminism given voice by Facebook COO Sheryl Sandberg, who’s 2013 manifesto Lean In: Women, Work, and the Will to Lead, was a kind of “women of the world unite!” call to arms.  Sandberg calls for women with the self-determination to bootstrap their way to corporate success. But of course, she’s only talking to a small number of the already privileged with the culture, ability and inclination to enter the patriarchal corporate hierarchy.  For Sandberg, it’s girl power that is the new savior of capitalism thanks to Facebook with a dose of Ivanka feminism.
What are other ideas for the Fearless Girl?  Gail Collins of the New York Times calls for a better placement for the girl to enhance artistic merit.

Environmentalists could buy her and set her down on Florida’s coastline at flood time, pushing back on global warming. Maybe she’d like to take another crack at stopping the Keystone pipeline. The next time protesters come to Occupy Wall Street, they could bring their girl along. Personally, I vote for Lafayette Park, across from the White House. Can you imagine her standing there, facing down Donald Trump every day?

I find these criticisms don’t go far enough in their criticism of corporate art’s insidious appropriation of feminist themes or icons. Of course, feminism itself is in danger as long as it is in thrall to Wall Street’s culture. It is telling that the statue was introduced on International Women’s Day, which has its origins in the Socialist Party of America in 1909. On March 8, 1917, exactly one century before Fearless Girl, a demonstration by textile workers in Petrograd shut down the city and was a turning point of the Russian Revolution. International Women’s Day was celebrated annually in socialist and capitalist countries until its appropriation by the United Nations in 1975.

Given this context, Fearless Girl has an even more insidious, surreal quality. It’s like when Mercedes Benz appropriated Che Guevara at an auto show to promote their new cars as revolutionary. Or like when the Washington DC Martin Luther King Memorial is unveiled as a white statue.  This is a function of capitalism as a political ideology, however, to absorb all dissent, to obfuscate criticism, sanitize history and flatten social space with a halo of social and political amnesia.

Of course, a true feminist revolution would be a totalizing reordering of an entire society that would re-ascribe ideas like profit, property, communal and environmental wellbeing. From the perspective of deep feminism, and socialist feminism, that Fearless Girl may as well be a possessed demon in need of an exorcism. It’s corporate rubbish.

Instead of Fearless Girl, the symbolic gesture is well to melt down the damn bull.  My favorite creative use of the Charging Bull comes courtesy of F-Society in Mr. Robot – where they castrate the bull, take a few selfies with the sack and drop it through the roof of Evil Corp.